The following are computational tools for use with the stretched imaging method as found in the following two references:

These tools have been written and validated for a Bruker Ultraflex II MALDI TOF-TOF instrument but can be adapted to other instrumental platforms as needed.

For creating geometry files using the Bruker TLC geometry with melted markers, needed for acquiring MS/MS images, this software is used: BeadGeometryMeltedMarkersTLCadapter.java. A GUI has also been created:

The stretched sample bead positions are normally identified from a thresholded optical image of the sample using ImageJ software with the Threshold_Colour plugin. Pixel coordinates can be obtained in ImageJ by changing the Analyze-->Set Scale-->Unit of Length parameter to pixel. Using the Analyze-->Analyze Particles command generates a list of bead coordinates. The input text file should consist of the stretched bead X-Y positions in pixel coordinates, in two columns that are delimited by either tabs or spaces. The left column has X-coordinates and the right column has Y-coordinates. For example:

The Scaling Parameters account for the differences in scaling between the stretched sample image pixels and the Bruker factional-distance coordinate system. The pixel spacing in microns is determined by an image of a calibration bar taken at the same magnification as used to take the stretched sample image. The well spacing parameter does not change and is set as the number of microns equivalent to the distance between spots in the original MTP Slide Adapter II.xeo geometry file, or roughly 0.086957 fractional distance units. One fractional distance unit is equal to 50.8 mm, which is the approximate length of the glass slide. In addition, the rotation angle can be used to rotate the calculated positions to account for differences in orientation between the stretched sample image and the position of the slide in the instrument.

The Common Points are used as points of reference to connect the calculated positions to their corresponding positions in the fractional-distance coordinate system. Multiple separate common points may be used to increase the positional accuracy of the custom geometry file. If less than 3 common points are used, the value for the remaining common point values should be filled in with duplicate values.

Finally, a geometry file is created in the working directory, which should be placed in the "Methods/Geometry Files" folder of the Bruker instrument computer. As the instrument is instructed to take spectra by the AutoXecute function, the new geometry file instructs FlexControl to save spectra in folders that are labeled with the X-Y pixel coordinates of each bead position. These filenames are eventually read into the MSIReconstructor software as the stretched bead positions that are used during the image reconstruction process.

First, Bruker .fid files are converted into .mzXML files using freely-available Bruker CompassXport software with the -multi command. The -multiName command should name the files as new.mzXML, which is the filename read by the Matlab code used in the subsequent conversion step. The Matlab conversion code requires the Bioinformatics Toolbox to installed be on Matlab. By setting the current directory in Matlab as the root directory that contains all mass spectra, the mzxmlConvertBatch command can be executed from the Matlab Command Window to convert the mass spectra into individual text files that are subsequently read by the MSIReconstructor program. Those text files should be placed in a newly created folder called "Spectra" that exists in the directory where the MSIReconstructor program will run.

There is also a MSIReconstructorMSMS application for plotting MS/MS ion images using the stretched imaging method:

Alternatively, if the Java JDK is installed, compile and run the MSIReconstructorMSMS.java file in a Windows MS-DOS command prompt.

The parameters text file contains the free transform parameters that are reported by the info palette in Adobe Photoshop, which are used by the MSIReconstructor application in matching the positions. Normally, optical images of the sample both before and after stretching are placed into a new blank Photoshop image file, and the free transform takes place within this file via the Ctrl+T command. The free transform variables are named as follows (all values are in pixels, except for the DeltaADeg value, which is in degrees):

The values in the parameters text file should be tab or space delimited as follows:

Before the free transformation process, an image file is created using PlaceDots.java that contains small brightly-colored squares at the initial bead positions. This is used in place of the initial sample optical image. Because the initial sample image is enlarged, the apparent size of the beads increases and results in a blurry image. In contrast, the smaller squares help in the free transformation process as they grow more slowly in size and are easier to see, as illustrated in the following image of a free transform overlay. 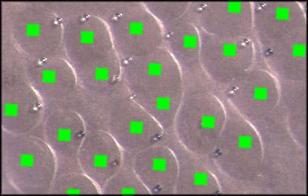 A text file of the stretched image bead coordinates and another file with the calculated transformed bead coordinates are generated during the run. These coordinates can be plotted by compiling and running the PlaceDots2.java program, The resulting image that contains an overlay of the two types of coordinates can be overlaid in a separate layer on top of the image file that contains free transform overlay. Use of the Magic Wand tool in Photoshop removes the dark background from the dots image before visual comparison. This optional exercise is used to visually validate that the calculated transformed positions align with the positions in the free transformed image.

Another optional task can be performed by the MSIReconstructor application. Double match reassignment can reduce matching errors during image reconstruction. If more than one stretched position is matched to a single initial position, the algorithm reassigns one of the positions to the next-nearest unassigned initial position in an iterative fashion. In several validation studies, this reassignment process reproducibly caused a slight improvement in the bead matching rate.

Finally, an ion image is created in either .bmp, .png, or.jpg format that can be converted into Analyze 7.5 format, if necessary, using the Analyze_Writer plugin for ImageJ. There are also several LUT color schemes for visualizing intensity scales under Image-->Lookup Tables in ImageJ. 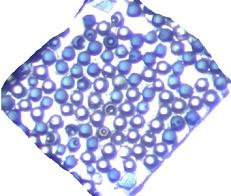