Welcome to the Songbird Neuroanatomy Webpages 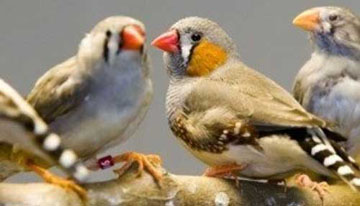 
This work is based on data presented in The Zebra Finch Neuropeptidome: Prediction, Detection and Expression, F. Xie, S.E. London, B.R. Southey, S.P. Annangudi, A. Amare, S.L. Rodriguez-Zas, D.F. Clayton, J.V. Sweedler, BMC Biology 8, 2010, 28. Imaging of the expression of neuropeptide prohormones is one component of understanding the interplay between the different brain regions and how neuropeptides are involved in song learning and production. To facilitate the continued investigation of these important signaling molecules in songbirds, we have made available neuroanatomical data for a subset of genes, including 15 prohormones. For more details about the songbird as a model organism, please see the Background section below.

The images on this website show the expression distribution of 15 prohormone genes across sections from an adult male zebra finch brain. You will find links for viewing brain sections stained for each of these genes.  To guide the identification of specific brain regions, we have also included the option to view all sections from one brain with some neuroanatomical annotation (“Whole brain”).  Information about the in situ hybridization procedure and a list of neuroanatomical abbreviations can be found by following the “Technical Notes” and “Abbreviations” links, respectively.

If you prefer to navigate the images using a filmstrip display, double click on one of the brain sections and the new view will open. Simply click on a link below to get started.

Songbirds, including zebra finches (Taeniopygia guttata), are well-established model organisms for a variety of biological functions and are notable for their complex natural behaviors such as vocal communication, learning, and social living structures. Of particular interest in songbird neurobiology is a set of telencephalic nuclei collectively called the song control system (see schematic below). This neural circuit is required for vocal learning and song production in male zebra finches and in other songbirds, and is also connected to the auditory forebrain lobule that provides the system with auditory information.  The song system is often divided into two interconnected pathways.

The posterior Motor Pathway carries information from the nucleus called the HVC to the robust nucleus of the arcopallium (RA).  The RA then projects to the tracheosyringeal nucleus of the XII cranial nerve (nXIIts) and hindbrain respiratory nuclei that directly regulate the muscles of the syrinx and air flow, respectively, to allow vocal production.  The Anterior Forebrain Pathway also starts in the HVC but involves a different set of HVC neurons that project to a nucleus in the basal ganglia known as Area X.  Area X then sends projections to the medial nucleus of the dorsolateral thalamus (DLM) in the diencephalon, which in turn connects to the lateral magnocellular nucleus of the anterior nidopallium (LMAN).  LMAN sends projections to the RA; these same projections split to form collaterals that loop back to Area X, thus connecting the two pathways.  We also now consider the auditory forebrain lobule (AL) as part of this circuitry because it projects to both the HVC and RA and has been functionally associated with the other components of the song system.

Information flow between these nuclei requires the presence of cell-to-cell signaling molecules such as neuropeptides. Neuropeptides are a complex group of signaling molecules which can act as neurotransmitters, neuromodulators, or peptide hormones.  However, detection and identification of neuropeptides is complex, for multiple reasons. First, neuropeptides are relatively small peptides that are produced by larger prohormone proteins via a complex series of post-translational modifications, including cleavage. The processing of a single prohormone can vary depending on the tissues and/or the developmental stages, and therefore neuropeptide localization is not always consistent with transcript localization.